This report was prepared at the request of Live Performance Australia solely for the purposes of publishing the Ticket Attendance and Revenue Survey Report and it is not appropriate for use for other purposes.

Other persons accessing this report should do so for their general information only as EY has only acted for, and advised Live Performance Australia, and has not acted for or advised anyone else in respect of the contents of this report.

This report should not be taken as providing specific advice on any issue, nor may this report be relied upon in any way by any person other than Live Performance Australia.

The report has been constructed based on information current as of 1 January 2014, and which has been provided by the Survey Participants as outlined in Appendix A of this Report. Since this date, material events may have occurred since completion which are not reflected in the report.

EY accepts no responsibility for use of the information contained in the report and makes no guarantee nor accepts any legal liability whatsoever arising from or connected to the accuracy, reliability, currency or completeness of any material contained in this report. EY and all other parties involved in the preparation and publication of this report expressly disclaim all liability for any costs, loss, damage, injury or other consequence which may arise directly or indirectly from use of, or reliance on, the report.

Liability limited under a scheme approved under Professional Standards Legislation.

This study follows on from the previous annual ticketing studies published by LPA in partnership with EY since 2006.

These companies were identified by LPA and provided both gross revenue and attendance data to EY for the 2013 calendar year. Gross revenue comprised revenue sourced from paid tickets only (i.e. it excludes sponsorships); while the attendance data provided and applied in the analysis included both paid and non-paid tickets*. Average ticket price data was calculated based on paid tickets only. As for the Australia Council, the data was limited to the Australian Major Performing Arts Group (AMPAG) companies. These were:

* Non-paid tickets include complimentary/sponsor/zero price tickets which are defined as those tickets that are given away for free or as part of contra, sponsorship or sales incentive agreements. It may also include tickets with an undetermined value at the time of issue, providing the ticket is generated with a zero price.

For these AMPAG companies, the gross revenue includes both single ticket sales as well as subscription revenues.

Ticketing data was assigned by the ticketing companies, self-ticketing venues and the Australia Council to event categories based on the guidelines established between LPA and these organisations. Table 1 presents a description of these event categories. Further, as part of these guidelines, the ticketing companies and venues are requested to exclude from their data all events produced or presented by the AMPAG Companies. This is to avoid double counting of revenue and attendance data.

*These categories were introduced in 2009
^This category was renamed in 2011, having been named “Non-Classical Music” in prior years

Survey participants provided data to EY directly. Confidentiality Deeds were in place between data providers and EY where requested. As such, and consistent with our agreed approach, EY did not reveal, insofar as possible, disaggregated raw survey data or event specific revenue or ticketing data to LPA.

While our scope of works did not include a detailed review of all data to determine the appropriateness of the events and event category allocations, where obvious anomalies were identified, appropriate amendments were made. Examples of such anomalies included for instance:

As with previous studies, data on ticket revenues and attendances for the Live Performance Industry was limited to that provided by the Survey participants. While national in reach, the coverage of this Survey excludes events in some regional venues, free performances, and also schools’ performances of the AMPAG companies. Small to medium companies and independent theatre are also under-represented as many of these companies either self-ticket or use ticketing service providers and venues not currently involved in the Survey. To capture these types of live performance events LPA and EY are producing a supplementary ticket attendance and revenue report for 2013 that will include data from the following organisations:

Moreover, attendances at festivals are under-reported in this Survey. First, some festivals maintain their own ticketing systems and many of these are not part of this Survey. The inclusion of ticketing data from Bluesfest, Adelaide Fringe and Fringe World for the first time this year addresses some under reporting in the festival categories. However, Tasmanian contributions to revenue and attendance are likely to be undervalued because growing festival events like MONA FOMA and Dark MOFO are self-ticketed and are not presently contributing data to the Survey. Second, for numerous festivals the Survey only reports paid tickets and does not include the substantial unpaid and/or unticketed components. The Contemporary Music category is subject to similar limitations; as pub and club venues that self-ticket, or use ticketing companies who are not part of the Survey are not included in the results. However, data from The Ticket Group helps to decrease the level of under-reporting, as this ticketing agency includes smaller performances at certain bars and hotels. Still, this Survey provides a conservative estimate of the total ticket revenues and attendances sourced from live performance events in Australia.

As part of our analysis, the 2013 data was compared against historical data sourced directly from Live Performance Australia’s Live Entertainment Industry in Australia 2006 - 2011 Reports. EY note that we did not revisit the data collection and allocation methodology used in 2006 and 2007 as the historical data used to prepare the reports in these years was not provided in a disaggregated format. As such, EY was unable to query the accuracy of the allocation of events in these years.

Therefore caution should be applied when comparing data from 2008 to 2013 with data from previous years as inconsistencies may exist in the data collection methodology between the surveys performed in these five years, and for previous surveys (where more detailed event specific information was not requested).

Changes in the 2013 Ticketing Survey compared to prior years

We have made the following changes to the Ticketing Survey in 2013:

On a like for like basis excluding the impact of the above mentioned additions, the total number of tickets issued in 2013 was 17.27 million, which generated total revenue of $1.448 billion.

When comparing 2013 data with that from previous years, the following should be noted in addition to the above changes:

At a time where the creative arts are facing government funding cuts and less solid support than ever before in this country, Media Super remains steadfastly committed to the people who entertain us with their talents and their charms, and to the businesses that employ them and foster this creativity. Over our 27-year history we have been a key part of Australia’s creative industries through sponsorship programs, employment and financial education support, and celebrating the excellence of performers all around the country.

We are a proud and long-term partner of Live Performance Australia and the crucial work they do on behalf of our industry. The LPA is represented on our Board and brings expertise and support for all members in the super fund. If our national culture is to continue being both vibrant and celebrated for its quality productions, partnerships such as that between the LPA and Media Super are critical. 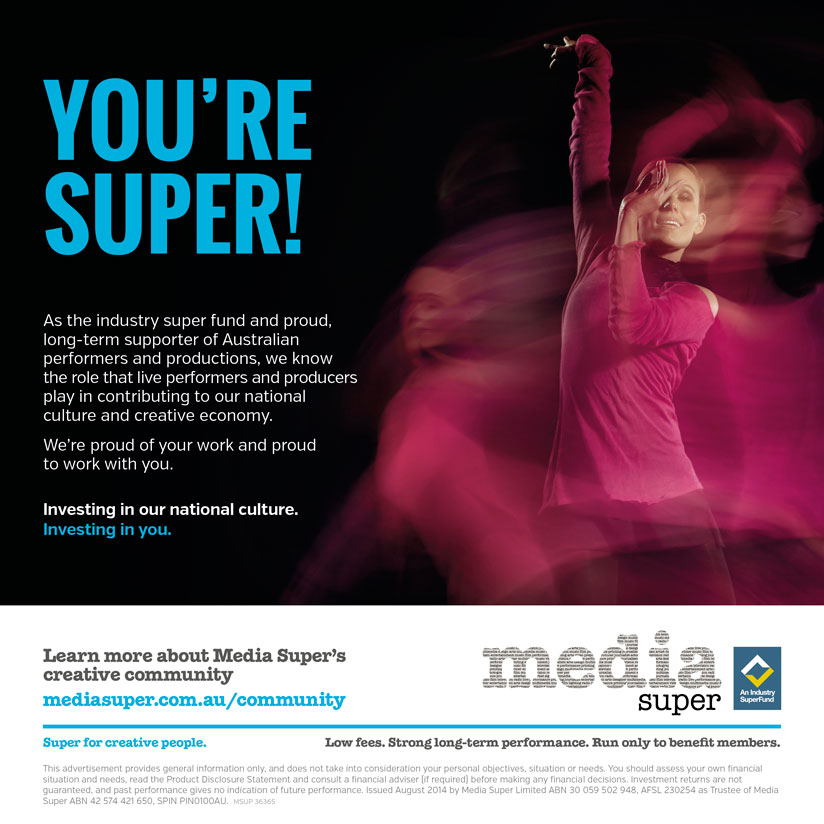